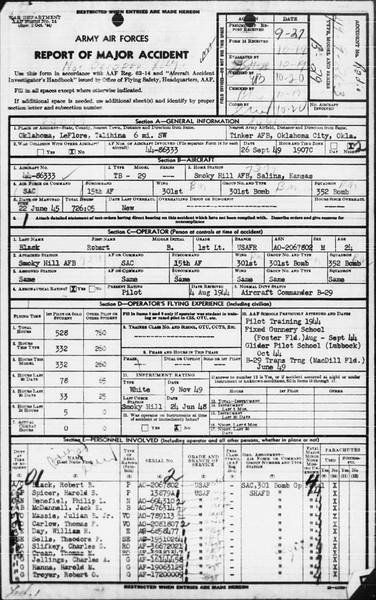 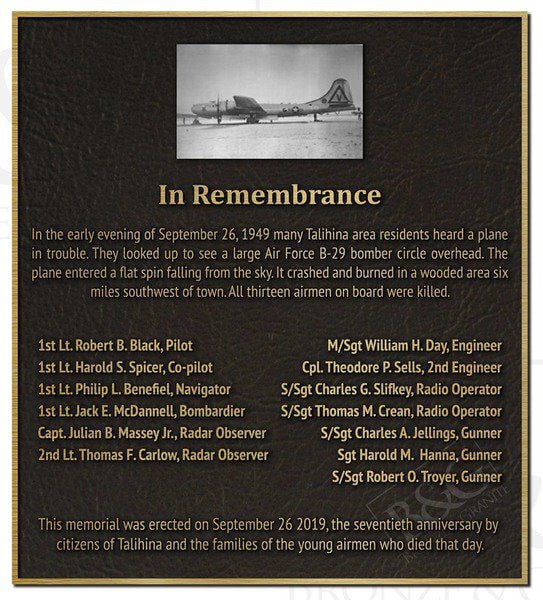 Sept. 28, 2019 memorial plaque to be dedicated at Talihina 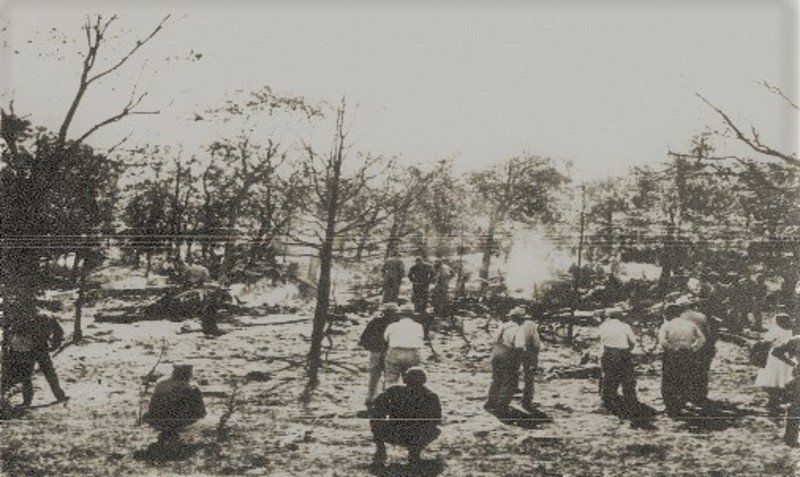 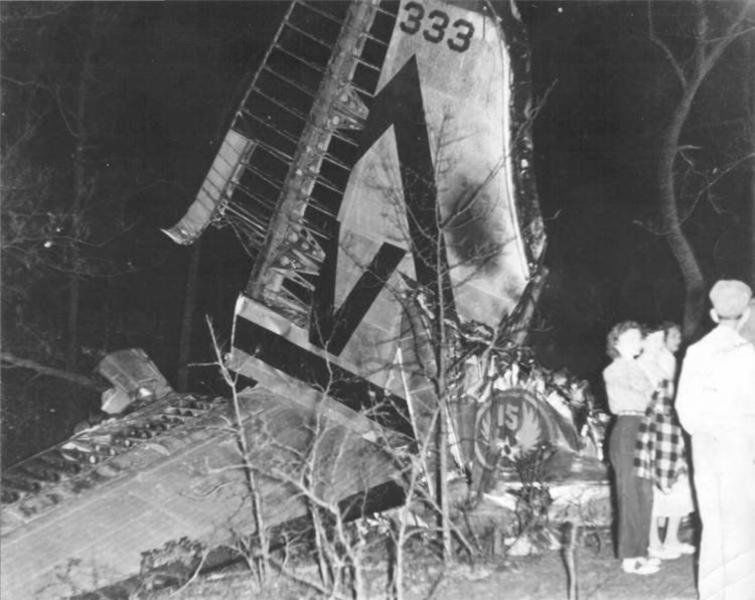 Sept. 28, 2019 memorial plaque to be dedicated at Talihina

The bomber, piloted by 24-year-old 1st Lieutenant Robert B. Black of Hutchison, Kansas, took off from Smokey Hill Air Force Base early on Monday morning for an eleven-hour training flight. The flight was to climb to 25,000 feet and cruise at 225 mph non-stop to Columbia, Tennessee-Decatur, Illinois-Birmingham, Alabama-Muskogee, Oklahoma-Sherman, Texas-Fort Worth, Texas-Tucumcari, New Mexico- Colorado Springs, Colorado- Denver, Colorado-and back to Salina Kansas.

Five hours into the flight, the B-29 was over Ft. Smith, Arkansas heading toward Muskogee. At 6:55 p.m. they radioed in that they were over Ft. Smith, Arkansas at 25,000 feet cancelling Muskogee and turning directly toward the next destination, Sherman. It is not known why that change occurred but it did put their flight path over Talihina, Oklahoma. At 7 p.m. they radioed the command plane asking them to relay their position over Ft. Smith to the base at Smoky Hill as their long-distance liaison radio was inoperative. That was the last contact with aircraft #44-86333. A short time later many residents around Talihina and Albion heard a plane in trouble. They looked up to see a large plane circle overhead. The plane entered a flat spin falling from the sky, and plummeted into an oak dotted hill.

John Emmert of Talihina shared in the Talihina American during August 2018, “In 1949, I was nineteen years old, and in high school. My high school class was in the midst of having a party at a classmate’s house. I remember that it was just beginning to get dark. We heard an airplane west of town. We were in the front yard and could tell the plane was in trouble. It appeared to be on fire. As we watched the plane crashed and exploded on what was then known as the Hubert Day place. It is now known as the Billy Howard ranch. Four or five us boys jumped into a car and drove out there. We were not ready for what we saw. The plane was a military plane. When it crashed and exploded, all thirteen members of the military on board were killed. The plane and the bodies were burning. Parts of the plane and bodies were everywhere. The other boys and I wanted to move them, to stop them from burning. The Sheriff told us to not touch anything, which was the correct thing to do. It took me a long time to adjust to the terrible tragedy. I will never forget it.”

Jack Bishop, then-Talihina Marshall, said, “five or six bodies had been sighted but that the flames of the plane were too hot for searchers to enter the wreckage.” He said, “the charred bodies will be left in the wreckage pending arrival of Air Force officials.” Bishop said, “the partly obliterated letter ‘15th Air Force’ was sighted on the burning plane with the numbers 333.”

The official Air Force Investigation Report concluded that the plane suffered an “explosive decompression which led to anoxia of the crew because they weren’t wearing oxygen masks.”

Twenty years ago the family of 29 year-old crew member radar operator 2nd Lt. Thomas Francis Carlow from Adams, Massachusetts, assigned to his first training mission since re-enlisting and just along for the ride on Sept. 26 to observe the new systems installed since he had left the Air Force four years prior, visited Talihina to find and visit the place where their loved one had died. That visit and an article by Carlow’s great nephew Scott Mahar entitled, “Return to Talihina” about the crash and his family’s search and experiences seems to be the beginning of what will culminate today (Sept.28) in Talihina during a day of remembrance of the 70th Anniversary of the tragic incident and of the thirteen men who lost their lives. Several family members from all across the country will be in attendance. The events of the day will begin at 11 a.m. with a parade followed by speakers and the unveiling of the memorial plaque at the Talihina Chamber Visitors Center. These activities will be followed by a lunch at the Talihina Choctaw Community Center.

Sheila Renee Lovett, 55, of McAlester, died on Tuesday, February 25, 2020, in Okla-homa City. Arrangements are pending with Bishop Funeral Service and Crematory of McAlester.

Mable Louise Herandy, 81, of McAlester, died Monday, Feb. 24, at a local nursing center. A memorial service will be held on Saturday, Feb. 29, at 1:00 p.m. at Brumley-Mills Funeral Home Chapel with Chaplain Jarrod Peterson officiating. Mable Herandy was born on Aug. 21, 1938in Kiowa to Lewis…