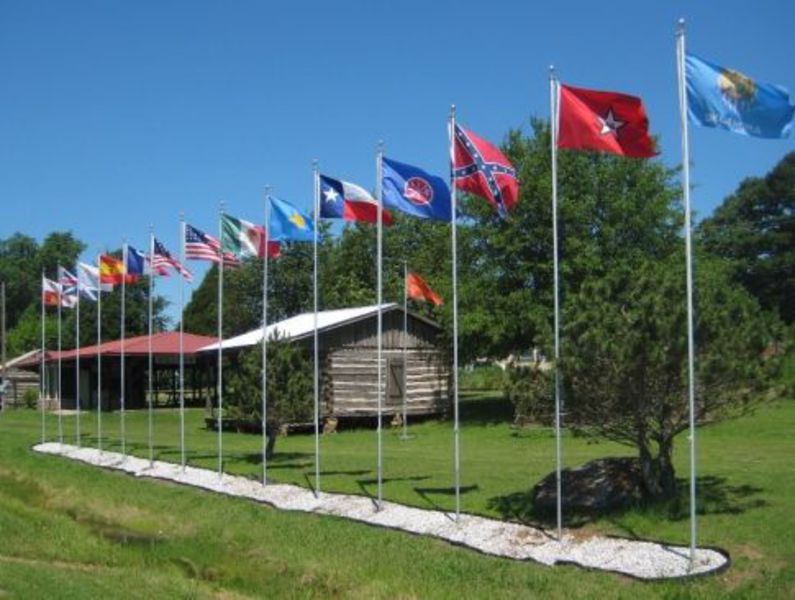 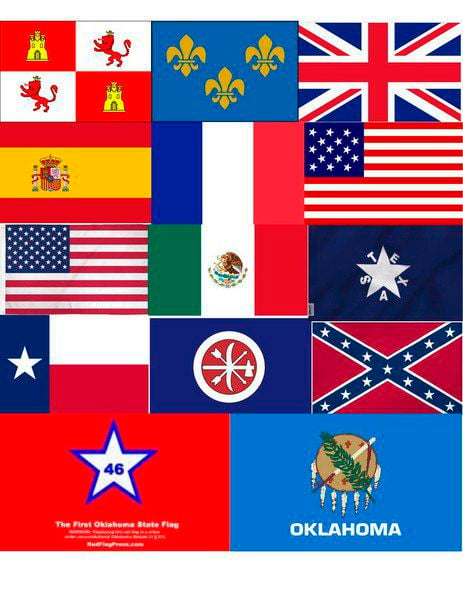 The 14 flags which have flown over the land which is now Oklahoma.

The 14 flags which have flown over the land which is now Oklahoma.

With this month’s 217th Anniversary of the Louisiana Purchase, and the pending U.S. Supreme Court case concerning the status of current boundaries of the state of Oklahoma (first heard last fall without resolution, then scheduled to be re-heard this month, now scheduled to be heard virtually due to COVID-19 in May) it seemed a great time to reflect on the 14 flags that have flown over what we now know as the great state of Oklahoma.

Since, explorers first came to the New World, 14 flags, including those of four foreign nations, have flown over the territory that became Oklahoma.

The first flag to fly over Oklahoma was brought to this area by Spanish explorers. The flag, the Royal Standard of Spain, was brought to the Great Plains area that included Oklahoma by Coronado and his followers in 1541. The red-and-white quartered flag has a golden castle on the red and a red lion on the white. The castle and lion represented royal houses Castile and Leon, from which the king of Spain descended.

The second flag was the Great Union flag of Great Britain. It flew over Oklahoma beginning in 1663, when King Charles II gave his friends a wide strip of country called Carolina, which stretched from the Atlantic to the Pacific.

France’s flag was the third to fly over Oklahoma. It was brought to this area in 1719 by Bernard de la Harpe, who visited an Indian village on the Arkansas River near Haskell in Muskogee County. However, the French claims on this area go back to 1682, when La Salle claimed all the country drained by the Mississippi River and its branches in the name of France, the state historical society said.

The flag of the Spanish Empire became the fourth flag, when in 1763 France gave all the country west of the Mississippi to Spain in the Treaty of Paris. This Spanish flag was different than the first one. It has a red stripe on both top and bottom and a gold stripe between. The castle and lion are on the gold stripe.

The fifth flag, representing Napoleonic France, appeared in 1800 when Spain gave the Louisiana Province to France. The flag has three perpendicular red, white and blue stripes.

The United States flag of 1795, with 15 stars, was the next to fly over Oklahoma when the territory was obtained from France in the Louisiana Purchase. It was in April of 1803 when French Foreign Minister Charles Maurice de Talleyrand made an offer to sell all of Louisiana Territory to the United States. War between France and Great Britain was imminent and Napoleon could no longer spare the military resources needed to secure control of the Louisiana Territory. Realizing that the powerful British Navy would probably take the territory by force, Napoleon reasoned it would be better to sell Louisiana to the Americans than have it fall into the hands of his enemy.

Flag number seven also was the U.S. flag. This flag’s design had been created by a law passed April 4, 1818. This flag ushered in 13 alternating red and White stripes.

The ninth flag appeared in 1836. It was the flag of the Republic of Texas and flew over the area that included the Panhandle when Texas declared independence from Mexico.

Another Texas flag, the Lone Star Flag, designed in 1839, was the 10th flag and flew over the Panhandle until 1850.

The Choctaw Flag (of the time), which Choctaw troops fighting for the Confederacy carried during the Civil War, was the eleventh flag.

Flag number 12 was the Confederate Battle Flag. Those flags were carried in Indian Territory during the Civil War during fighting at several sites.

Although Oklahoma became a state, in 1907, the first state flag, which also is the 13th to fly over Oklahoma, wasn’t officially adopted until 1911. This flag is red and has a five-pointed white star in the middle with the figure 46 in blue in the middle of the star. Oklahoma was the 46th state in the union. That version didn’t last long.

The 14th flag is the current state flag and was adopted in 1925. The flag, a field of sky blue similar to a flag carried by Choctaw soldiers during the Civil War, honors the sixty different groups of Native Americans living in Oklahoma. The shield in the center is an Osage warrior battle shield. It is made of buffalo hide and decorated with eagle feathers. Two symbols of peace rest on the shield. One is the calumet or peace pipe and the other is an olive branch. The crosses on the shield are Native American signs for stars. The state’s name was added in 1941.

The story of Oklahoma’s current state flag is actually a Fluke. A Louise Fluke, that is. In 1924, a Daughters of the American Revolution-led contest allowed people to suggest a new state flag, and the winner was artist Louise Fluke, of Shawnee. She had studied art at Columbia University and the Chicago Art Institute.

In 1966, the 14 flags over Oklahoma plaza was unveiled at the south end of the state capitol. They included the flags that controlled all or parts of Oklahoma throughout history. Flag number 12 was the confederate battle flag. In 1988, the flags were removed for renovation. When it was time for them to go back up some controversy ensued. When the flags went back up, the pole where the confederate flag once flew remained empty. In 2002, then Governor Frank Keating decided to replace all the remaining flags and only fly the Oklahoma state flag. The 14 flags moved to the Oklahoma History Center where they do fly the confederate flag, but not the one we're used to seeing. It's the national flag of the confederacy from 1861.

Locally, a 14 Flags Museum is located in Sallisaw, in the downtown area just east of the intersection of U.S. Highway 59 and U.S. Highway 64 (also known as Business I-40 and East Cherokee Street). The outdoor museum is open daily during daylight hours. There is no admission fee to visit.