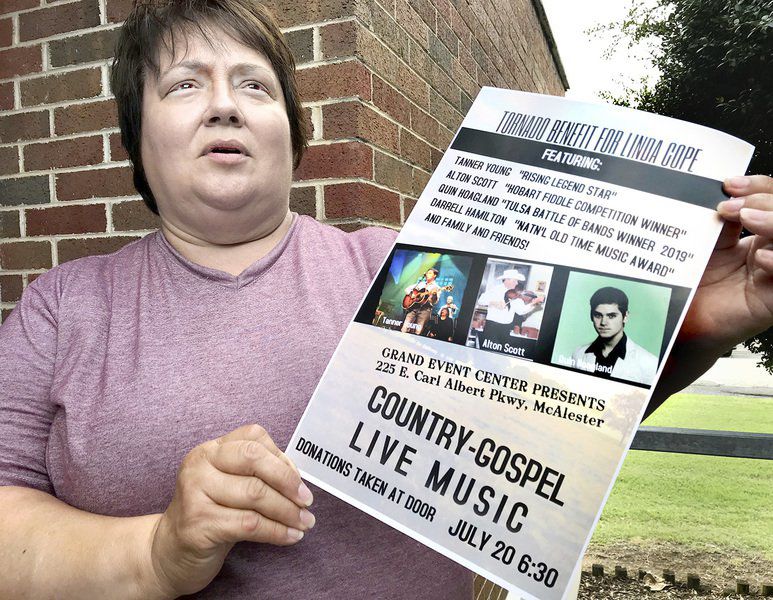 KEVINM HARVISON | Staff photo A country-gospel music show is set to benefit  Linda Cope, who lost her home in the Haileyville tornado. The benefit is set for 6:30 p.m. on Saturday night at the Grand Event Center in McAlester. 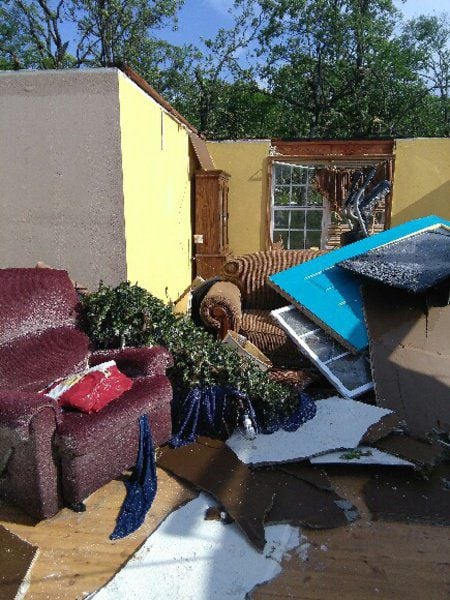 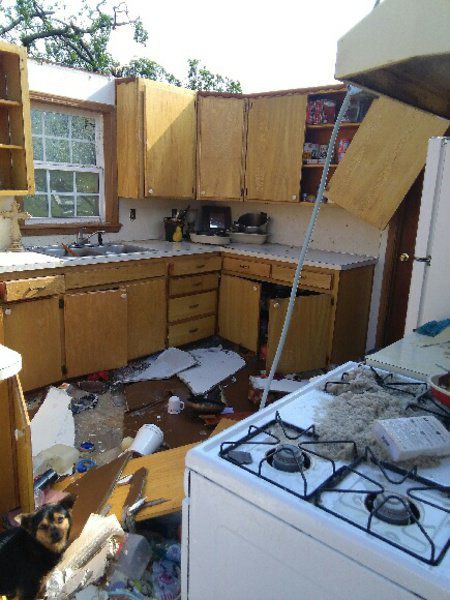 KEVINM HARVISON | Staff photo A country-gospel music show is set to benefit  Linda Cope, who lost her home in the Haileyville tornado. The benefit is set for 6:30 p.m. on Saturday night at the Grand Event Center in McAlester.

Everything changed for Linda Cope when a tornado tore through Haileyville on the night of April 30.

Before the tornado, Cope had what she considered a nice home.

But when the tornado ripped a swath through Haileyville, it left the home unlivable.

Things could change again for Cope on the night of July 20.

Cope said her niece and her niece's husband organized a benefit performance to help her out in the tornado's aftermath.

"She told me 'We want to do something to help,"' said Cope. They called on some friends they knew from Oklahoma'a music scene, and they agreed to help as well.

The country-gospel benefit is set for 6:30 p.m. Saturday at the Grand Event Center, at 225 E. Carl Albert Parkway in McAlester. Donations will be taken at the door, with no other admission fees in place.

Artists scheduled to perform include:

• Tanner Young, a singer and acoustic guitar flat-picker, from Colbert, Oklahoma, who specializes in bluegrass, gospel and classic country music. Young is a winner of the Rising Legend Award at the National Old Time Music Festival in Le Mars, Iowa, where he also won first place in the National Guitar Contest. He was also named the 2017 male vocalist of the year at the Pauls Valley Opry.

• Quin Hoagland, billed as a Tulsa Battle of the Bands winner for 2019, who is also known as Hoarseman, of Hoarseman & The Heard. His album, "Notre Dame is Burning" is set for a July release.

Cope is still amazed that she wasn't inside her home when the tornado struck.

"This is a God thing," Cope said. "I was standing in my front door when the tornado hit Haileyville." Although the city did not have a working storm siren, Haileyville police were driving up and down the streets with their police sirens blaring, trying to warn citizens that a tornado has headed for the city.

Ordinarily, Cope said she would have ridden out the storm inside her house, but this time, she felt led to do something different.

"The Lord said 'Take shelter,'" Cope related — and that's exactly what she did.

"I grabbed my keys and took off," Cope said. She drove to Haileyville Public Schools, which had a shelter available. She noted the storm didn't last for long — but it lasted long enough to do plenty of damage.

"In about 20 minutes my home was destroyed," Cope said.

She spent the rest of the night at some friends' house. When she returned home, she had to walk part of the way because the road was covered with debris. She said some ambulance drivers offered to walk with her on the last part of the trek and she accepted.

She said she's glad they did, because she wasn't expecting to see the devastation caused by the tornado.

"It jerked the roof off the house," Cope said.

She not only lost the roof, she lost many of the furnishings inside. Even all of her towels were blown away by the tornado, she said.

"I lost mattresses, chairs, bedding furniture. Where did the towels go?" Amazingly, she said, some glass figurines her late husband, James Cope, had collected for her remained in place, but most of her other belongings were lost. Fortunately, her family photos, which had been placed under some other items, were not among them.

Linda Cope feels things can be replaced — but she did hate to lose two of her favorite Bibles.

"Yes, I lost everything, but how blessed am I that the Lord said 'Take shelter,'" Cope said. She said she later heard someone ask "Where was God?" when the tornado struck.

Cope remembered how she felt compelled to seek shelter and the comfort she later felt while shedding tears about her loss.