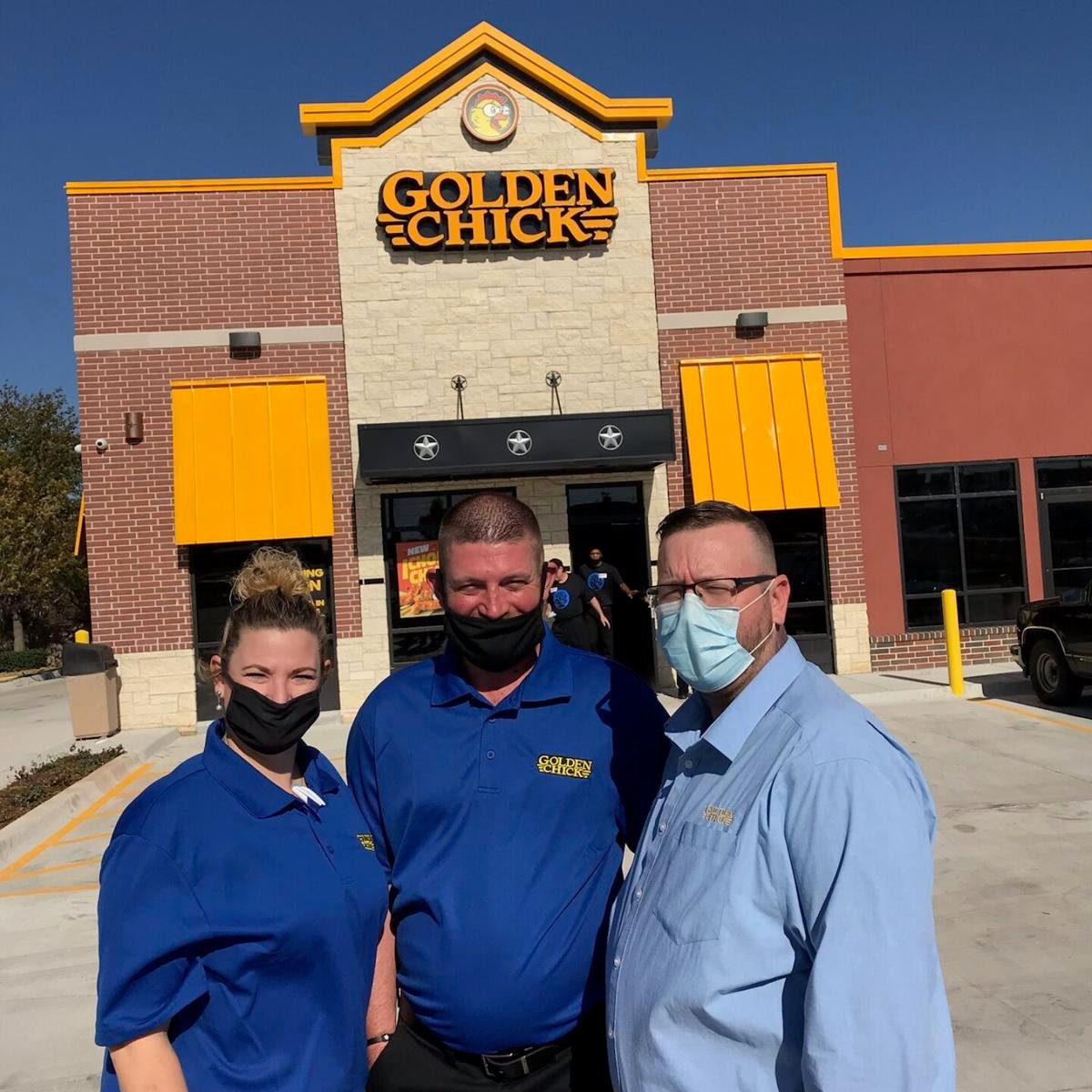 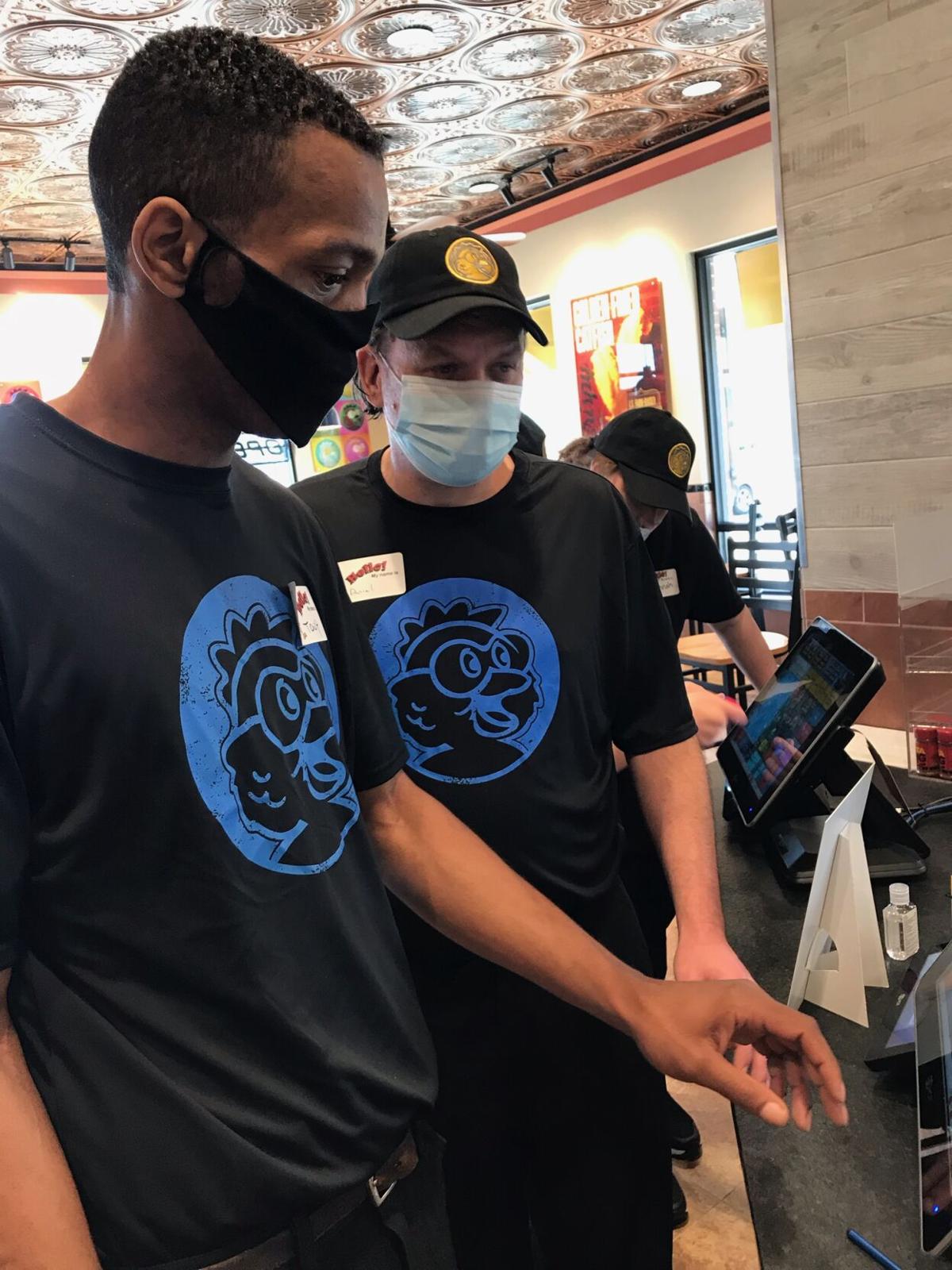 Tony Thomas, left, and Daniel Wortham participate in a pre-opening training session for employees at the Golden Chick restaurant in McAlester. Golden Chick, at 1129 S. George Nigh Expressway, is set to open Monday, Nov. 23.

Tony Thomas, left, and Daniel Wortham participate in a pre-opening training session for employees at the Golden Chick restaurant in McAlester. Golden Chick, at 1129 S. George Nigh Expressway, is set to open Monday, Nov. 23.

The new Golden Chick restaurant in McAlester is ready to take flight.

"We are doing training this week," owner Allen Odetallah said of preparations for the opening of the new restaurant at 1129 S. George Nigh Expressway in McAlester. He said COVID-19 precautions will be in place for the opening, with markers already on the floors advising patrons where to stand as they wait to give their orders.

Golden Chick is bringing a number of new jobs to McAlester.

"We've hiring 51 people so far," Odetallah said Thursday — and he still had more hiring to do. He said about seven positions were still open.

"Our expectations are higher. We're looking at having 58 people," Odetallah said of the total number of employees expected.

He said one of the reasons he wanted to open a Golden Chick restaurant in McAlester is to give back to the community.

"I am involved in the community," said Odetallah. "I want to give back to the city. I like to bring more business to this town."

Golden Chick won't be the first restaurant in McAlester for Odetallah. "I'm the owner of the Pizza Inn," he said.

Plans are underway for more than a Golden Chick restaurant at the site. Plans are to add a game room in a large room adjoining the restaurant, and then to add a pizza restaurant on the other side of the game room. The pizza place will offer much more than pizza, such as a salad bar, as well as more traditional foods, such as potatoes and green beans.

That way if some members of the family are in the mood for chicken, but others would prefer pizza or something else, they could all get the food of their choice.

Hopes are to have the pizza restaurant ready to go and open in about four weeks.

Jason Franklin is serving as general manager, with Assistant Manager Richard Foster and Manager Lindsay Wyatt a. Franklin thinks Golden Chick and the related endeavors will do well in McAlester.

"We did our homework for demographics for the county," he said.

He also thinks it will be good for the community.

"We're getting people back to work," Franklin said.

Several grand opening-related events are being planned for later, including the giveaway of a new bicycle and other items.Plans are for Golden Chick to be open from 10:30 a.m. until 11 p.m. on a daily basis.

Golden Chick is a franchise that began in 1967 in San Marcos, Texas. Originally named Golden Fried Chicken, the named changed to Golden Chick in 1993. The Golden Chick franchise is now in more than 180 locations in states including Texas, Oklahoma, Louisiana, Florida, Georgia and South Carolina.

Its specialties include the company's Golden Tenders and Golden Roast Chicken. Southern-fried catfish is also on the menu.

"We have a healthy product and a variety on the menu," Odetallah said. Sides include mashed potatoes, battered french fries, green beans, fried okra, cole slaw, salads, mac and cheese and "dirty rice," which includes rice, meat, and spices.

Golden Chick is adjacent to the La Quinta Inn and Suites, near the Hardy Springs Road and U. S. Highway 69 intersection.