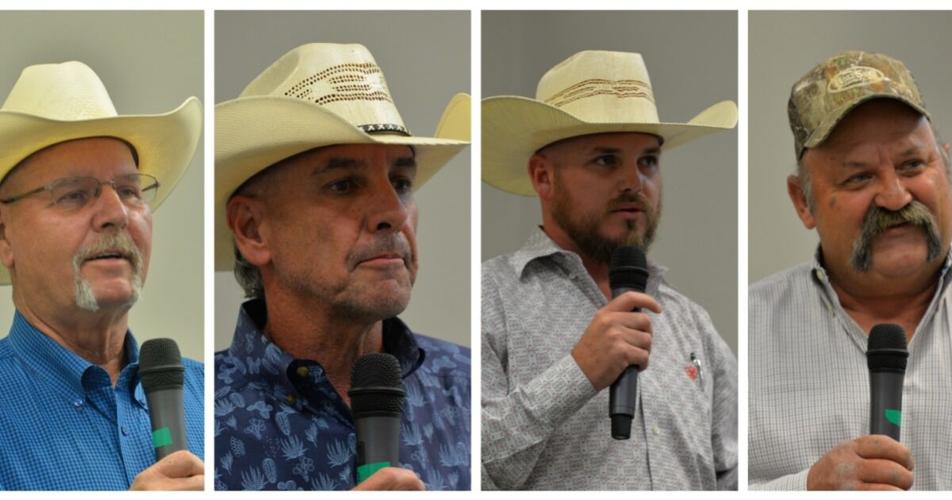 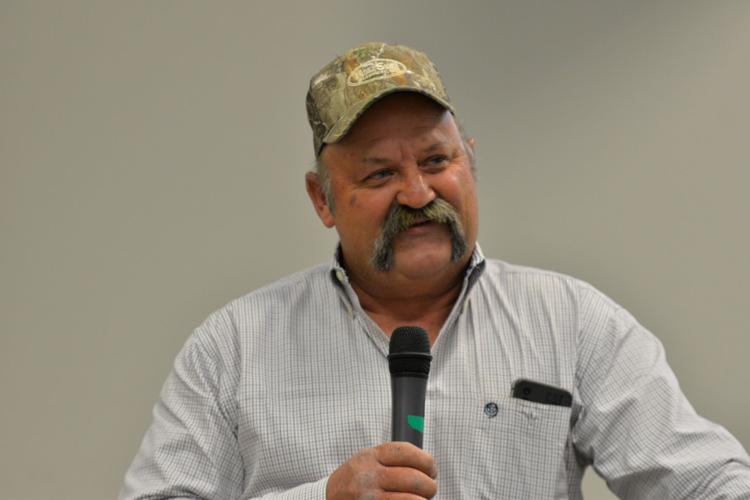 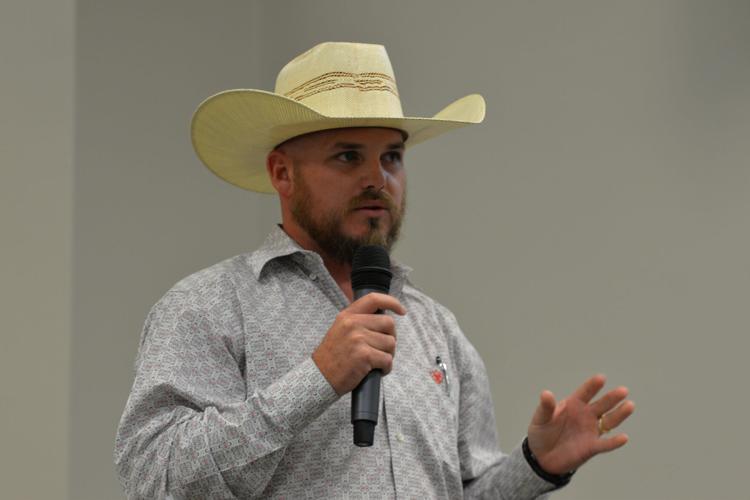 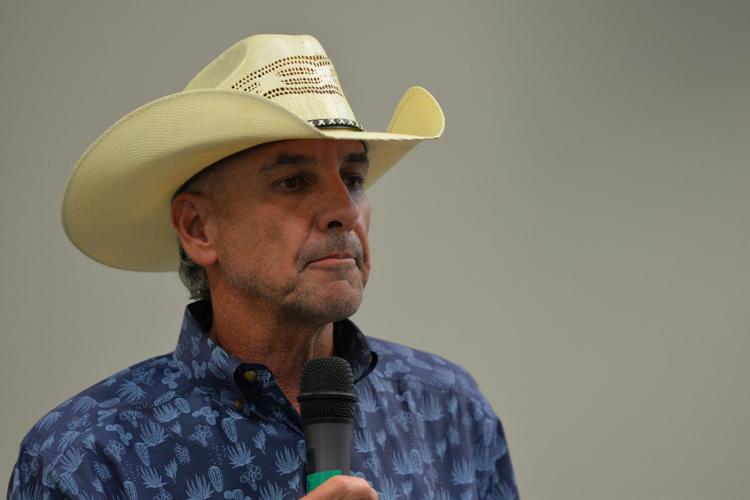 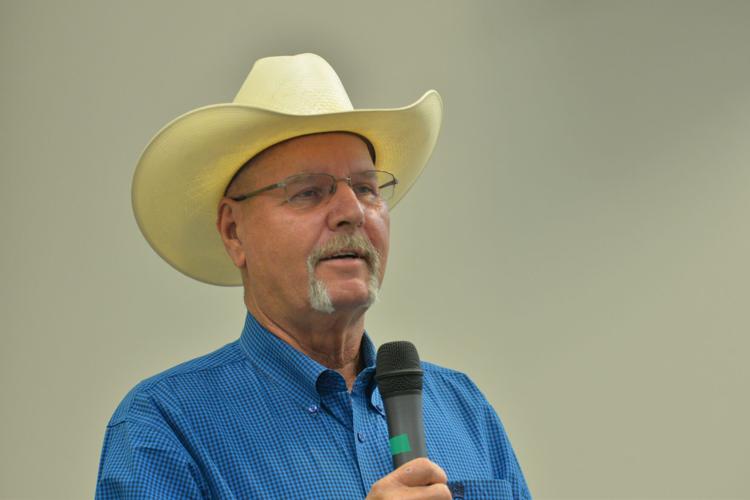 All four District 3 Pittsburg County commissioner candidates faced off about county roads, a plan for the Southeast Expo Center, and more.

The McAlester News-Capital's forum at Eastern Oklahoma State College's McAlester Campus, gave the public an opportunity to see and hear all four candidates on the same stage, with questions for the night presented by News-Capital journalists.

Current District 3 Commissioner Ross Selman faces challenges from District 3 candidates Glen Padgett Sr., Trent Myers and Logan Sanders. Since all four filed as Republicans and no others challengers filed, the election could be decided by the upcoming June 28 Primary Election.

If none of the candidates gets more than 50% of the vote during the Primary Election, the top two vote-getters will advance to the Aug. 23 Primary Runoff.

In their opening statements, candidates touted their experience as qualifying them for the job.

"I worked for the county for seven and a-half years," Padgett said, saying he's seen lots of ways to save the county tax money.

"I think the biggest problem with our roads is drainage," said Padgett, who maintained that drainage is a problem with from 60-to-70% of county roads.

Sanders, in his opening statement, said he was born, raised and went to school in Pittsburg County. He said he worked for five and a-half years on his grandfather's ranch, worked at the McAlester Army Ammunition Plant and eventually started his own construction company, which he maintained gives him experience for the District 3 commissioners' post.

Selman noted he's been the District 3 commissioner for the eight years. "Before this, I was a hand for 13 years," he said. "I worked hard as a hand and as a commissioner.

"This job is not easy," Selman said, saying he spent 13 years as a county employee helping maintain the roads. He said he sees what's needed and does his best to provide it. He said his work assisting with the McAlester/Pittsburg County Office of Emergency Management is a highlight of his term in office.

"We are now the hub of Southeast Oklahoma," he said, referring to emergency management services.

All four candidates were asked what would be their number 1 priority if elected to office.

"My main priority is getting the roads fixed like they need to be," Padgett said. He maintained the county is "spending hundreds of thousands of dollars that don't need to be spent."

Myers said "My number one priority is to be more efficient. " Noting rising fuel costs and other inflationary factors, he predicted expenses are going to be astronomical.

"You're going to have to manage your employees to be efficient," he said. "That's going to be tough on everybody."

Sanders agreed with Myers regarding efficiency. "When we build a road, we have to get our base built right," he said. Sanders said in running his own construction business, he has to make sure he's being efficient every day.

Selman said he will continue to represent people in the county. He said funding that's been cut by the state has cut into the budget for roads, making it necessary to sometimes go back and do patch jobs.

Candidates were also asked what the commissioners' plan should be regarding the Southeast Expo Center.

Myers noted that the Expo Center manager has resigned.

"We have to get somebody in the promotion business," Myers said. If the Expo Center doesn't have an event every week, it's going to tough to maintain it, he said.

Sanders suggested having signs regarding upcoming Expo events in addition the current one that's at the site.

"If we could find another sign, or billboard inside McAlester, it would help," he said. Having air conditioning inside all of the building would help, he said. Sanders said he had a booth at the recent Italian Festival, but a lot of people didn't want to come inside the Expo Center because it was so hot. An HVAC upgrade is needed, he said.

Selman said the commissioners are already working toward promoting different events and adding HVAC throughout the Expo.

"We had a plan ready to go, but it came out way too high," he said. That resulted in the commissioners having to drop back and reformulate the initial plan, but commissioners are still working toward the HVAC.

Padgett said he knows very little about the Expo. "If the county's going to have the Expo, we need to promote it," he said. Padgett said there's more acreage on the Expo Center grounds than where the building sets, and suggested that property could be utilized.

"Use the acreage you've got," said Padgett.

Candidates were asked what county commissioners could do to maximize resources toward road construction and maintenance.

Selman noted the passage of a sales tax to be used toward county roads. "About 2016, we proposed a penny sales tax which the people graciously passed," he said. He also pursues grants for projects, Selman noted, and referred to the Tannehill Road project as an example.

Padgett said "You've got to think outside the box." He said the county spends a lot of money on brush-hogging that could be saved if the county would spray in the spring like the state does.

Myers maintained he was working toward a penny sales before it passed, saying he and another individual came up with the idea.

Candidates were asked what they would do as county commissioner to ensure transparency in the office.

Selman said the county is currently transparent. "Any check goes through three different departments," he said. "Our meetings are all open record. If you want to know something, come and ask."

Padgett said he worked for the county for seven and one-half years. He said he would look at everything. Padgett said regarding some of the courthouse stuff, he will have to learn it.

Myers said "I'm probably the most transparent guy you'll ever meet. Anybody in the world can call me anytime."

Sanders said he would use social media to help ensure transparency. "I want to have town hall meetings in different districts either every quarter or every six months," he said.

Following the forum, all four candidates stayed to hear candidates in other races on the June 28 Primary Election ballot.