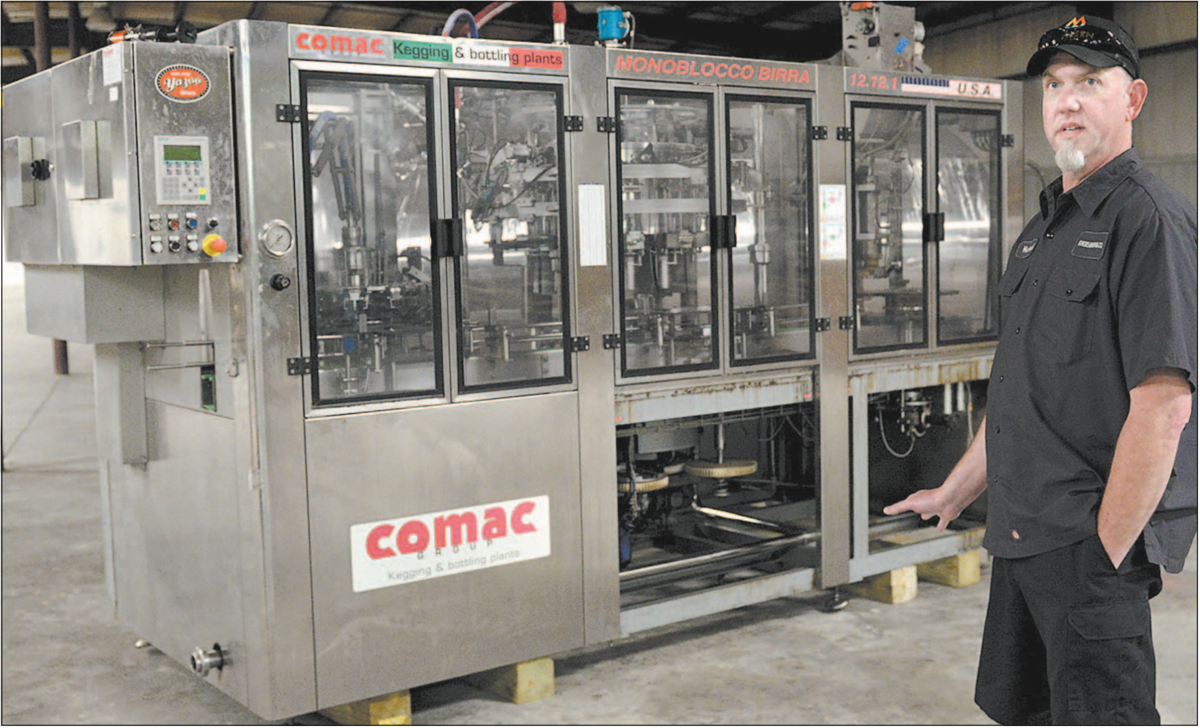 KREBS BREWING COMPANY Brewmaster Michael Lalli stands in front of a bottling machine at KBC’s new facility in McAlester. The facility will become the chief production location for KBC. 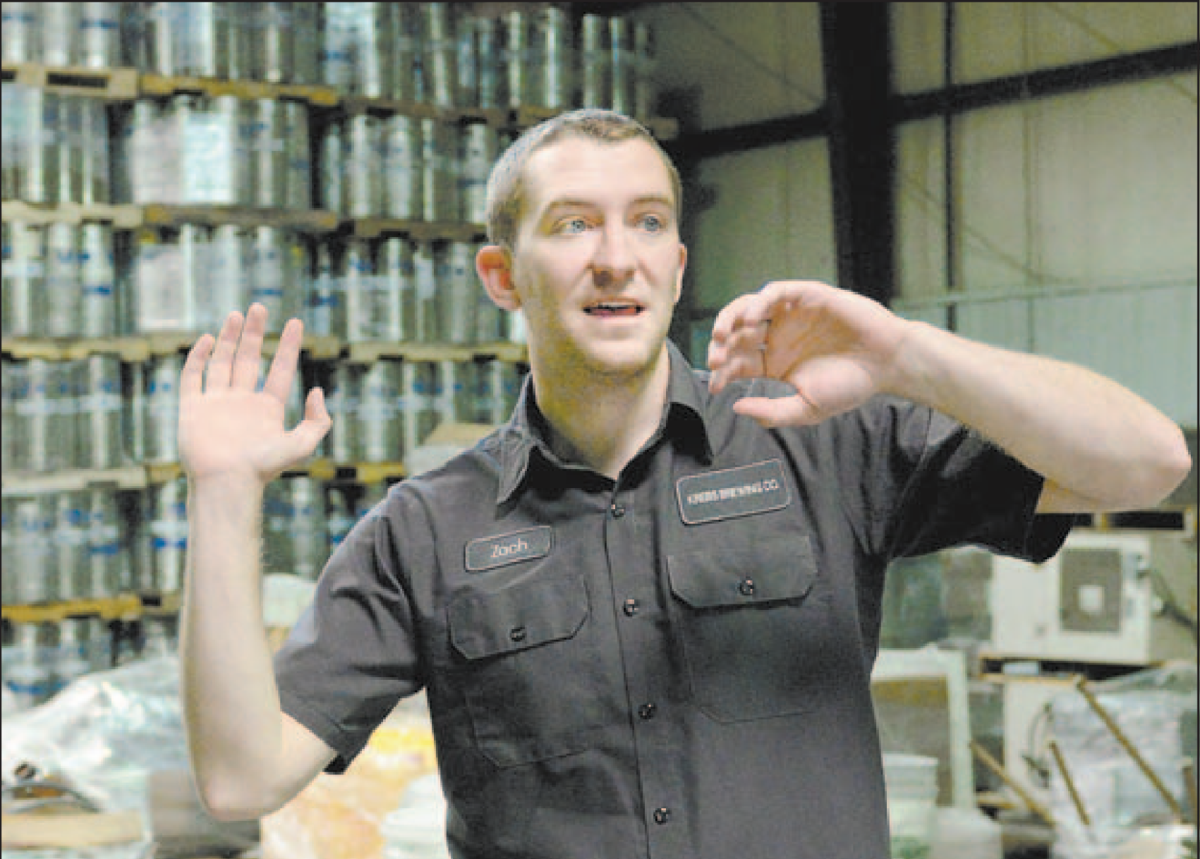 KREBS BREWING COMPANY President Zach Prichard explains the layout plans for KBC’s new production facility in the Steven Taylor Industrial park in McAlester. The company is relocating the majority of its production away from its current facility at Pete’s Place Restaurant. 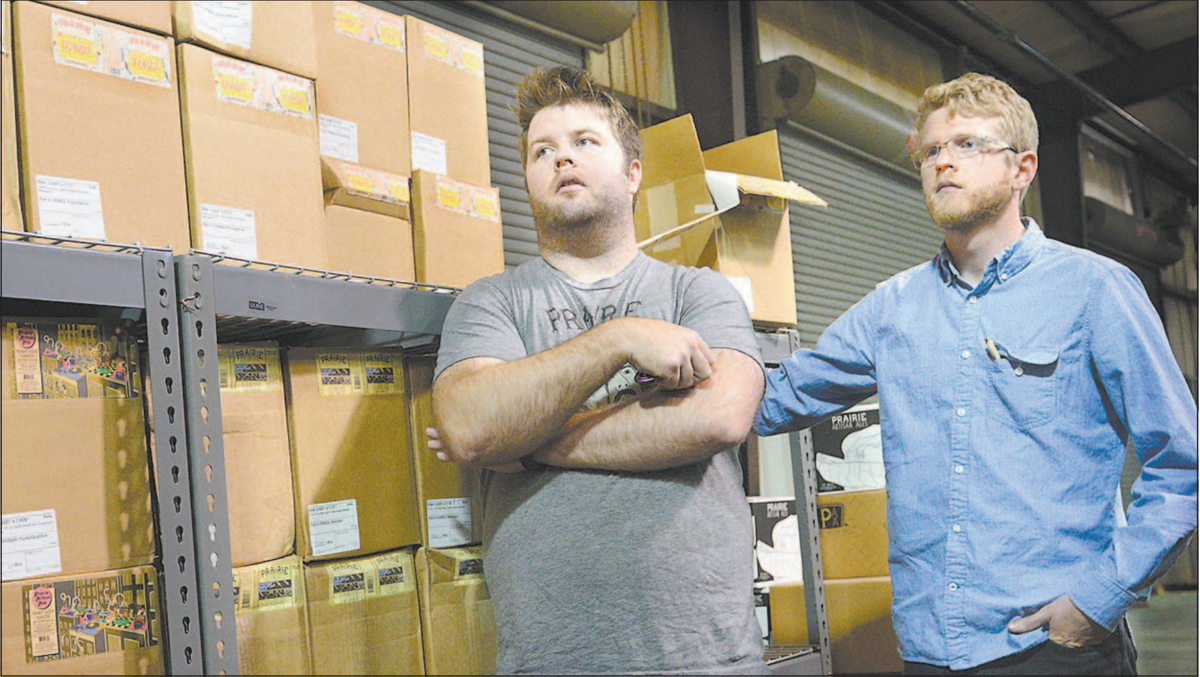 KREBS BREWING COMPANY Brewmaster Michael Lalli stands in front of a bottling machine at KBC’s new facility in McAlester. The facility will become the chief production location for KBC.

KREBS BREWING COMPANY President Zach Prichard explains the layout plans for KBC’s new production facility in the Steven Taylor Industrial park in McAlester. The company is relocating the majority of its production away from its current facility at Pete’s Place Restaurant.

Sometimes you outgrow your home.

Krebs Brewing Company is expanding beyond its current production facility at Pete’s Place Restaurant. Known for brewing Choc Beer Company and Prairie Artisan Ales products, the company recently acquired a 52,000 square foot facility at the Steven Taylor Industrial Park in McAlester and, within the next year, plans to relocate the bulk of beer production.

“Immediately there is three times the amount of space as we have now, with room to grow,” President of Krebs Brewing Company Zach Prichard said. “This will allow us to have more beer and better beer. The property sits on 17 acres and will instantly allow for five to six times the current production.”

KBC experienced exponential growth during the past three years. The company employed four people full-time in 2013. There are nearly 30 employees now, and the company outgrew its space.

“We currently brew all our beer on the same site as Pete’s Place,” Prichard said. “With the growth, we’ve had to expand.”

Prichard predicts with larger facilities and greater production the employment could double in the next three years.

“The best option for our business is to move into this existing building in McAlester,” Prichard said. “I think it’s a really good move to make and will benefit this community — McAlester, Krebs and the surrounding area.

“The existing facility (at Pete’s Place) will still be used,” Prichard added. “Making that transition from Krebs to McAlester, while maintaining that Krebs heritage seemed like an easy move.”

Prichard anticipates the new facility won’t be fully functional until spring 2017. The building needs to be retrofitted to accommodate beer production. Drains will be added to the floors, minor electrical changes and the setup of new equipment will consume the better part of a year, Prichard said.

Chase Healey — who cofounded Prairie Artisan Ales with his brother Colin Healey — is excited to see what Prichard can do with the increased space.

“It’s grown beyond me,” Chase Healey said. “Beyond Zach and beyond Colin. This is a big step. I’m excited to see the success for those who have poured their time into it.”

Chase Healey credits the complimentary strengths of the brothers’ creativity with Prichard’s business savvy as a key element to the success of Prairie Artisan Ales’ growth.

“I’ve always been more of a conceptualizer and dreamer (along with my brother) and Zach is more the business side,” Chase Healey said. “Our creativeness and his vision for potential really allowed this to land.”

The project doesn’t come cheap, but the beer-makers and businessman might not be the only ones to benefit from the endeavor.

KBC’s new facility is roughly 52,000 square feet and approximately $4 million will be invested into the project initially, Prichard said. The building is currently being rented but there is an option to purchase at a later date — a figure not included in the $4 million estimate.

“We are trying to keep upfront costs low,” Prichard said. “Being in the brewery business is very capital intensive. The equipment is all expensive.

“It’s not grow, grow, grow, grow anymore,” Prichard said. “It’s, ‘How do we make a great company that perseveres?’” The beers produced by KBC are already an internationally- recognized product. Consumers can purchase products brewed in Krebs in 22 different states and “every continent but Africa and Antarctica,” Prichard said.

“We think there’s potential to develop it into an environment to host people from out of town,” Alsup said. “The rate of growth of craft beer, it is really a growing market and seems to be continuing to grow. The number of jobs I think will be a decided asset for our immediate area.”

Alsup praised the type of work this expansion brings to the community.

“A lot of people call this ‘basic industry’ because you’re making a product and selling outside our market,” Alsup said. “They’re making our economy bigger and with higher-paying jobs you’re enhancing the average wage of our community. These are the types of jobs that grow an economy.”

Prichard said he was fearful the company wouldn’t be able to find qualified individuals with beer-making experience when KBC was founded. This proved to be a non-issue as most of the employees the company now has came from the local community with little to no experience, but have been great for the growth of the company, according to Prichard.

“I’ve been really, really encouraged,” Prichard said. “We’ve found awesome people who came in with little or no brewing experience.”

Allowing employees the ability to work efficiently and thrive in the community by creating a positive work environment is one of Prichard’s goals.

“Our focus is high-quality beer, people and community,” Prichard said. “It’s hard to be a member of your community if you’re working long hours, or weird hours. We want them to help this community flourish moving forward.”

KBC Brewmaster Michael Lalli is one example of local worker turned beer aficionado. Lalli worked at Pete’s Place before transitioning to KBC. The move to McAlester is exciting.

“It will allow us to continue what we are doing at a much higher level,” Lalli said. “For a guy who is a production brewer, like myself, I’m all about the process and anything to improve the production and control ... it’s good.”

The changes may not end with an improved production facility. Prichard described the potential to eventually develop the land to allow for the hosting of events, and Alsup said the city is assisting in the application for grant money to assist in future development.

“The city of McAlester is assisting Krebs Brewery on their project,” Alsup said. “We are in the process of putting together a community development grant (application).”

The grant could potentially be for $1 million, Alsup said.

“We anticipate the application for the Community Development Block Grant — Economic Development Infrastucture Financing (CDBG-EDIF) will (likely) go to the (city) council on April 26. We’re excited about the project, we think Zach is a bright young businessman and his business has a bright future.”

McAlester could benefit from generated sales tax if KBC decides to set up a taproom or event center where the KBC products could be sold on site, Prichard said. An environment to gather and enjoy beer is appealing to Prichard, and he wants to be able to do so in southeast Oklahoma. He’s from Krebs originally, graduated from McAlester High School and enjoys being here and doing business.

“We’ve got the kind of community I love being a part of,” Prichard said.

Wanda Rankin, 94, of Hartshorne, passed away Monday, May 3, in Hartshorne. Visitation will be Thursday til 8:00 p.m. at Brumley-Mills Funeral Home in Hartshorne. Graveside funeral services will be Friday at 2:00 p.m. at the Bache-Red Oak Cemetery