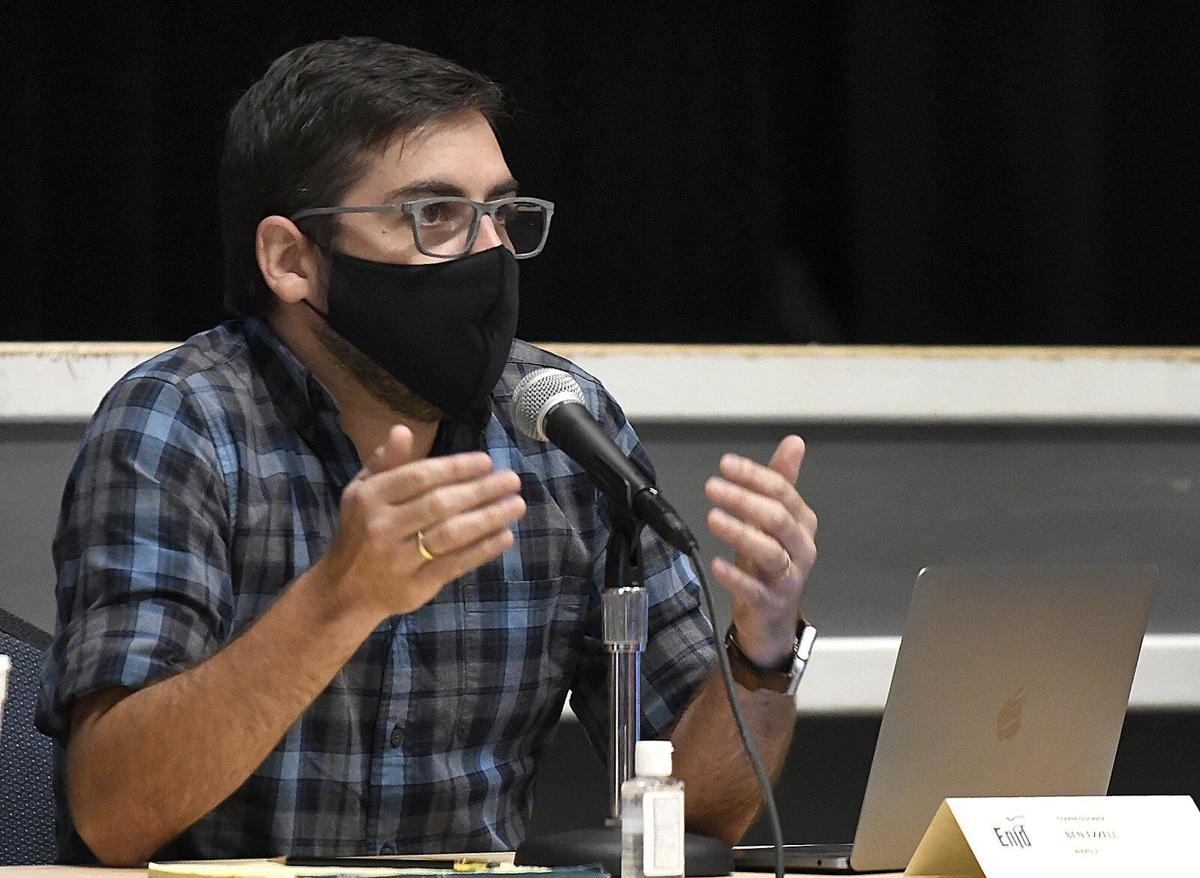 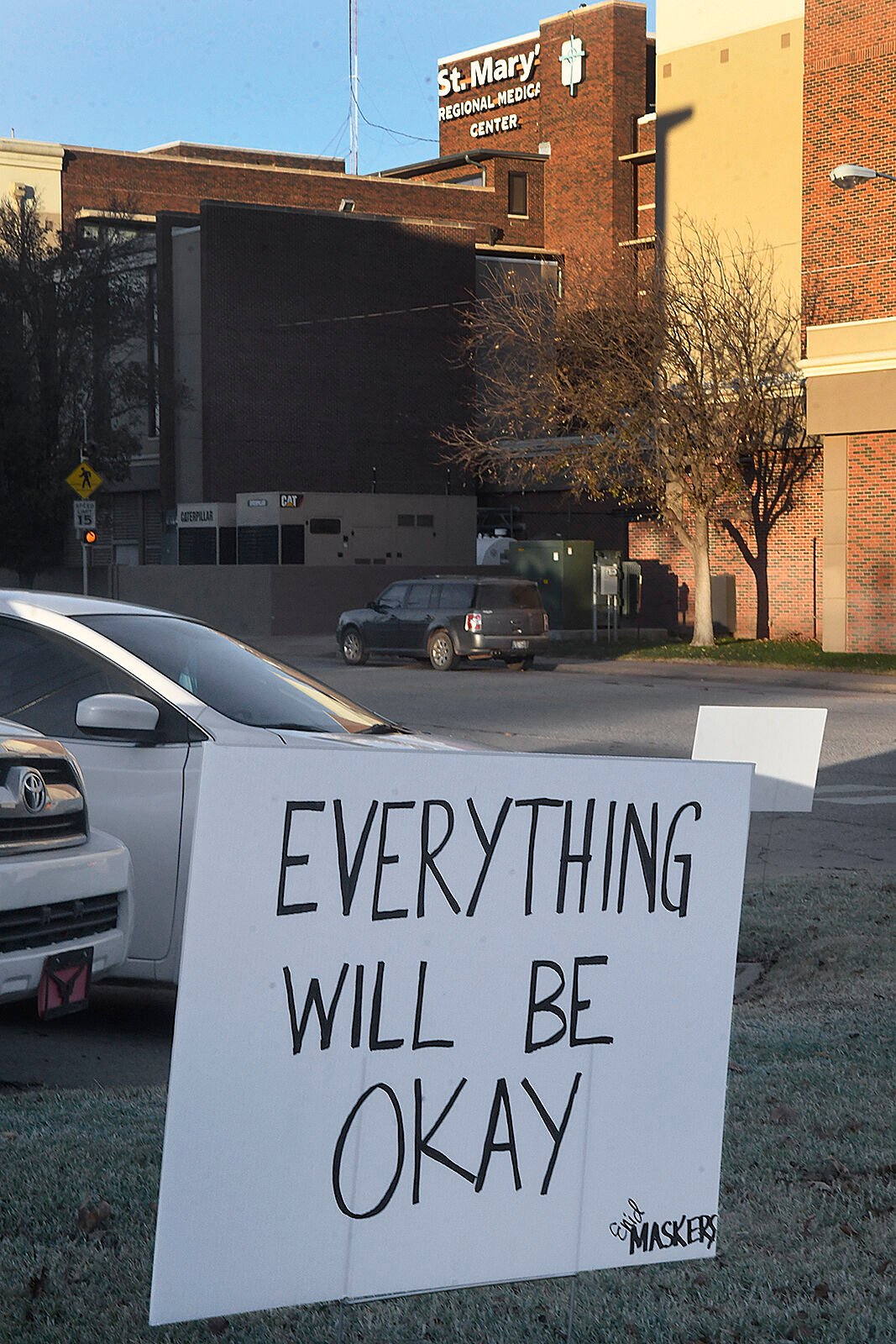 One of the signs of encouragement placed by the Enid Maskers at St. Mary’s Regional Medical Center Tuesday. (Billy Hefton / Enid News & Eagle)

Enid’s city commissioner who’s long been the most outspoken on more stringent public health protocols related to COVID-19 on Tuesday criticized the city’s continued inaction, while Garfield County and the rest of the state have continued to see case counts and rates of infection reach their highest points over the last several weeks.

Ward 3 Commissioner Ben Ezzell took his fellow commissioners to task for saying they’d consider a mask mandate if cases continue to rise as Tuesday night’s meeting was wrapping up in its public comment section.

He initially began speaking on the city’s proclamation of Nov. 28 as Small Business Saturday, saying he took issue that there was nothing on Tuesday’s meeting agenda addressing COVID-19 aside from approving state CARES Act funds for Enid Public Transportation Authority.

“We have repeatedly failed to act, and it’s an embarrassment,” he said, his voice occasionally breaking, “and four of you have said at multiple meetings that if conditions keep getting worse, you’ll revisit things. And conditions are worse, guys.”

Ezzell in August proposed a mandate system that would’ve included mask requirements, which failed, 4-3, before the commission.

Those four votes came from Mayor George Pankonin, Ward 1’s Jerry Allen, Ward 5’s Rob Stallings and Ward 6’s David Mason, all of whom Ezzell said Tuesday night have refused to do anything once cases began increasing in Enid. Commissioners Derwin Norwood, of Ward 2, and Jonathan Waddell, of Ward 4, voted in favor with Ezzell.

“Because if you tell us in the meetings that things are going to get worse, but you won’t say what worse means, it’s kind of a hollow promise,” Ezzell said.

A previous proposal had failed in July, with a 5-2 vote, and no proposals since Ezzell’s have been brought to a vote. Pankonin canceled a special meeting for a third proposal when he stated he knew he didn’t have the votes.

Ezzell said the commission is forwarded those emails, notes from which he then read. He said public health experts had told the commission months ago that numbers would increase if the city reopened.

“‘There are no ER beds available,’ ‘nurses and doctors are on the verge of tears,’ ‘we have schools closed at least until Thanksgiving’ — God knows how long that’s going to last,” he said. “Our hospitals are begging for help. Krista and Finny are stretched past their capacity. Maggie is stretched past her capacity.”

He then cited the state epidemiologist’s Nov. 13 weekly report, which stated COVID-19 cases in cities without mask mandates grew by 109%, cases in those with mask ordinances rose by only 39% from around the same three-month period, as reported by the Tulsa World.

Interim state epidemiologist Dr. Jared Taylor’s analysis covered Aug. 1 to Nov. 11 and used the seven-day average of cases by date of onset, with a seven-day lag.

While daily case counts two weeks ago were skewed due to Saturday backlog numbers, OSDH Commissioner Lance Frye on Nov. 9 said looking at the seven-day average was more important to show community spread.

Garfield County’s cases as of Tuesday showed 496 currently active, with 33 deaths, out of 3,109 total.

“We’ve had 33 people in our town die. Thirty-three people die!” Ezzell said, slamming his fist on the table with each syllable. “None of you said at which point worse is worse. It’s really damn bad. If we had been able to reduce our infection rate to a third of what it is, we could’ve saved 22 lives. This math is not complicated. And I am baffled that not a single one of you — not a single one of the four of you — even announced to this community what is enough. It is insane.”

Once Ezzell said he was finished, Pankonin continued the meeting with the item to propose convening into executive session to discuss ongoing mediation with Koch Fertilizer Enid LLC, to resolve a pending dispute. No other commissioners made any comment.

“Because if you tell us in the meetings that things are going to get worse, but you won’t say what worse means, it’s kind of a hollow promise."

The commission then approved the mediated agreement after reconvening from executive session.

Ezzell is currently facing a recall over the mask proposal, as well as “conduct unbecoming of a public official,” among other reasons listed in the petition calling for his recall. He, the city of Enid and the petitioners are currently awaiting a ruling on Ezzell’s objection to the petition’s sufficiency. That election is set for February, while Ezzell’s term expires in May.

Ezzell’s speech Tuesday comes on the heels of other city councils throughout the state voting on mask mandates. Norman City Council voted for a first time to extend its through February (it will vote twice due to sunset laws), while Tahlequah and Stillwater both approved ones in the last week. Stillwater’s entire council is facing a recall over its actions. Muskogee’s council rejected another proposed mandate Monday night, 4-3.

The city commission earlier in the meeting had approved contracts to two debris cleanup companies, as well as declared a disaster emergency in Enid in order to seek reimbursement from FEMA and the state following the ice storm from late October.

Commissioners also approved taking, appropriating and condemning two tracts of land as parcels for the Kaw Lake Water Pipeline project. During a prior study session, commissioners were told the construction manager at-risk’s guaranteed maximum price had come to $243,358,908.

They will approve that proposal from CMAR Garney at their Dec. 1 meeting and will vote to award the construction contract on Dec. 17.

Construction on the water pipeline is set to begin in March 2021. It is now projected to cost about $317 million, project managers said Tuesday, after having been earlier budgeted for $315 million.

This story has been updated to include cited data from the Nov. 13 Tulsa World article on the state epidemiologist's report.

Ewald is copy editor and city/education reporter for the Enid News & Eagle.

Have a question about this story? Do you see something we missed? Send an email to aewald@enidnews.com.